Variety is the Spice of Life Part 8

If you don’t know about the bloodline of the gods being RH-,their location in the mountains due to climatic changes, their looks, etc. you need to go back and read the first posts.

Enough with the intro though.

The stories/myths of the Ancient gods have changed and evolved, just as we see done still today with the real character of old, St. Nicholas. For those of you who don’t know, he was a real guy.

Saint Nicolas, a Greek Bishop from the third century, around 280 A.D., was a man who gave his inherited wealth to the people in need throughout Europe. He lived during the time of the “Great Persecution.”  His kind soul eventually ended up in jail and he was tormented for his beliefs. Nicolas died on Dec. 6, 343 A.D., and his death was honored on this anniversary, being called  St. Nicolas Day, until the protestant reformation in the sixteenth century, when it was moved to Dec. 25.

The Dutch name for Saint Nicholas is Sinter Klaas. When the Dutch immigrated to America, the name Santa Claus originated in New York, or then New Amsterdam, because of the alike sound. Many cultures around the world have different names for this figure. In England he is known as “Father Time”; to Swiss and German children he is “Kris Kringle.” In Scandinavia, he is a jolly elf named “Jultomten” that delivers presents on a goat drawn sleigh. To the French he is “Pere Noel” and he fills the shoes of good French children. To Russians he is an elderly woman named “Babouschka,” who leaves gifts for children on Jan. 5. In Italy he is a woman named “La Befana,” who is a witch that rides a broomstick down chimneys to deliver toys, according to History.com. It’s amazing to see how with integration and segregation of cultures and with every passing generation the story has grown, and 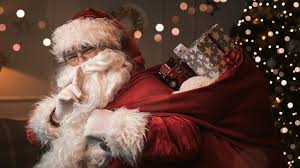 changed, until he is hardly recognizable to be the old St. Nicholas.

Accordingly, anyone new to the stories/myths of the “ancient aliens” would immediately call them fiction. And yet, upon closer examination, they pretty obviously have their origin in truth.

Like the classic game of telephone where one whispers a message in the ear of the first one in a line of people, and they in turn do the same until the message gets to the other end of the line, inevitably the message gets all garbled sounding. So with time, and the stories mainly surviving by oral traditions, the myths of the gods have been dramatically changed as well.

Even eye witness accounts that were written down are very unreliable. As any court knows, eye witness accounts are the weakest line of evidence, as it has to pass through the filter of our character, ethics, personality, memory and perception. This was apparently known in the days of the Old testament, as the Jewish law stated that only “in the mouth of two witnesses a thing shall be established”. Even with that though, the evidence was often corrupted, as in the case of the story of Naboth in the Bible (who was framed by a powerful and wicked king Ahab’s wife Jezebel, who payed off 2 people to lie).

The point is though, as with the story of Santa in the recent history of man, we see what our tendencies are with myths and stories; we embellish them. . .sometimes purposefully, other times out of ignorance from just repeating what we are told. So our myths have followed this pattern of evolution, typical of man down through the ages.

One of the first things to go in this “evolution” of the myths seems to have been the Goddesses. No surprise there though, as we see the same thing happened in most of the world. We see this in how Mary Magdalene’s true role in history, as well as her writings have nearly been erased, in favor of many men’s versions. The times were very patriarchal, or “sexist”, just as now the pendulum has swung the other way toward a matriarchal system or “feminism”.

As the cultures changed to be more man centered, the men sought to erase all mention of the woman leaders of the past. We see this even in the changing of wording in the Bible. It is pretty obvious that the role of woman in a leadership role would not fit with the culture of the New Testament, so in making the canon of the Bible, books were thrown out, and things changed to make sure that woman had no say in how the New testament church was run.

It is clear with study of the Bible, that the Old testament is not consistent with the New testament in the rule that no woman should lead men, or that she needs to be submissive to him in any way though. This was just culture evolving the myths; the gods of every religion are still evolving with culture.

Ask any two Christians or followers of Islam or paganism for instance to describe their god, and what they are like, and they will put their own conscience’s preferences in place of what their mind knows about their god(s). For instance some people’s God’s are “love”, and he accepts all who call on the name of the Lord. He hears everyone’s prayers, and seeks their good. He allows differing lifestyle choices without saying a person isn’t a follower of his. . .Whereas other people’s “God” is full of condemnation and judgement. He is to be feared, and obeyed, if you know what’s good for you. If anything bad happens to you in life, well, God is testing or judging you. How can all these people believe they know God, and are feeling and seeing him even, and yet be so different?! The simple explanation is that all the gods are (now) only in our minds, or imaginations and are very similar to a child’s invisible friend.

The only difference from god being in our heads is that “God’s spirit” actually can be found physically within us, if we are “God’s child”. The only possible connection we have with the gods now, besides genetically, (presuming they are still alive) is in our own mind, thru ESP. . .some call it prayer. That lacking close communication to them may not be long lived though, according to many ancient prophecies. . . are you ready for the ascension and the second coming of the aliens?. . .

Of course, don’t get too antsy with the thought of their imminent return (like over 2000 years of Christians have), because with verses like these, “Verily I say unto you, there be some standing here, which shall not taste of death, till they see the Son of man coming in his kingdom.” (Matthew 16:28)

It makes me think that he was talking to  eternal fellow aliens, . .and even they may not live that long. So it could simply have been a mistake,  mistranslation, or a complete lie as he’s late! If not, please Christians, tell me your excuse for why Jesus’s not here yet; surely no one’s alive from back then. I’ll be waiting.